This year’s national police wellbeing survey saw the highest survey response yet with 36,633 officers, staff and volunteers taking part – which is a 60% increase on the number of respondents from last year.

The totally independent survey, carried out with the Policing Research Unit at Durham University, ran for seven weeks from October to December 2021. The aim of the survey is to give every member of the policing workforce across England and Wales the opportunity to tell us how they truly feel at work so we can build a really clear picture of what we need to work on.

The data has now been analysed and a full national report has been created and is available using the button below.

So what does it tell us?

The findings for police officers particularly, confirm that policing continues to be a challenging and stressful occupation. General wellbeing returned to pre-pandemic levels, and job satisfaction and a sense of being valued by the public have declined.

However, having a sense of meaningful work remains at a high level, as does the sense of connection to colleagues and overall mental wellbeing.

We have also seen an increase in a sense of competence, and a decrease in depression.

Leadership skills of front-line police officers and staff is a key priority for policing and the findings in this survey have demonstrated how critical supportive leadership is to individual wellbeing, and attitudes and behaviours.

This will be drawn into the ongoing work within the College of Policing to develop the National Police Leadership Centre, which will have an initial focus on first-line supervisors.

The 2021 survey identifies hindrance stressors or work-related constraints (things like bureaucratic barriers, administrative difficulties and poorly designed work processes) as an enduring, and serious problem, which is driving many of the areas of concern we track such as intention to quit, supportive leadership, workload and job satisfaction.

The Front-Line Review (FLR) identified organisational stressors as a priority issue and HMICFRS are increasing their focus on hindrance stressors.

Several police forces are integrating this challenge into leadership training while others are exploring how technology can be used to remove unnecessary work. These are all positive developments which will be supported through the Police Covenant.

Some of the findings are challenging and should be seen in the context of a demanding year for policing as we have emerged from the pandemic combined with a series of events which have drawn significant criticism of the service.

This survey captures the voice of over 36,000 police officers and staff and enables police chiefs, the College of Policing and National Police Wellbeing Service to prioritise the health of their people.

There are enduring problems that we must take steps to address. In particular the problem of hindrance stressors – this leaps off the page this year which is why it has been identified as a Police Covenant and HMICFRS priority.

On a daily basis police officers and staff are exposed to distressing events which we know has a considerable effect on their mental health and wellbeing. This survey has emphasised the importance of looking after our people so they are able to look after the public.

Some of the issues identified are not new and we must redouble our efforts to find solutions and make sure police officers and staff are getting the best support and care.

The new Police Covenant is welcome recognition of the important role that those in policing fulfil to help make communities safer. The College of Policing’s National Police Wellbeing Service, Oscar Kilo, will continue to work with the wider policing family to tackle the problems raised.

The findings will also inform work to establish the National Police Leadership Centre so we develop people focussed leaders at every rank who recognise how important it is to look after each other.

Ultimately, we carried out this survey because it is important that our work is focused on what those who are doing the job every day are telling us they need and so findings will be used to evidence the development of the work of the National Police Wellbeing Service and College of Policing.

The expectation now is that forces will also address the key themes locally and pick this up with their staff associations as they continue to develop their local wellbeing offer. The National Police Wellbeing Service will support them where they need it.

We will continue to ask for the views of officers, staff and volunteers and work with wellbeing leads in every force to ensure that we have sight of the issues that matter the most.

We’re working closely with others who are there to provide support, such as the Police Federation, Superintendents’ Association, unions, staff associations and charities to make sure that we can enhance the support on offer.

The Police Covenant has now been enshrined in law and is already influencing positive improvements in areas such as Occupational Health standards, recruitment of a Chief Medical Officer for policing, mental health support for new recruits and a much more robust offer to support families and those who retire from the service.

Finally, there will be another national survey later in 2022 so that we can continually assess if and how things are changing for officers and staff to ensure we continue to offer the most relevant services and support. 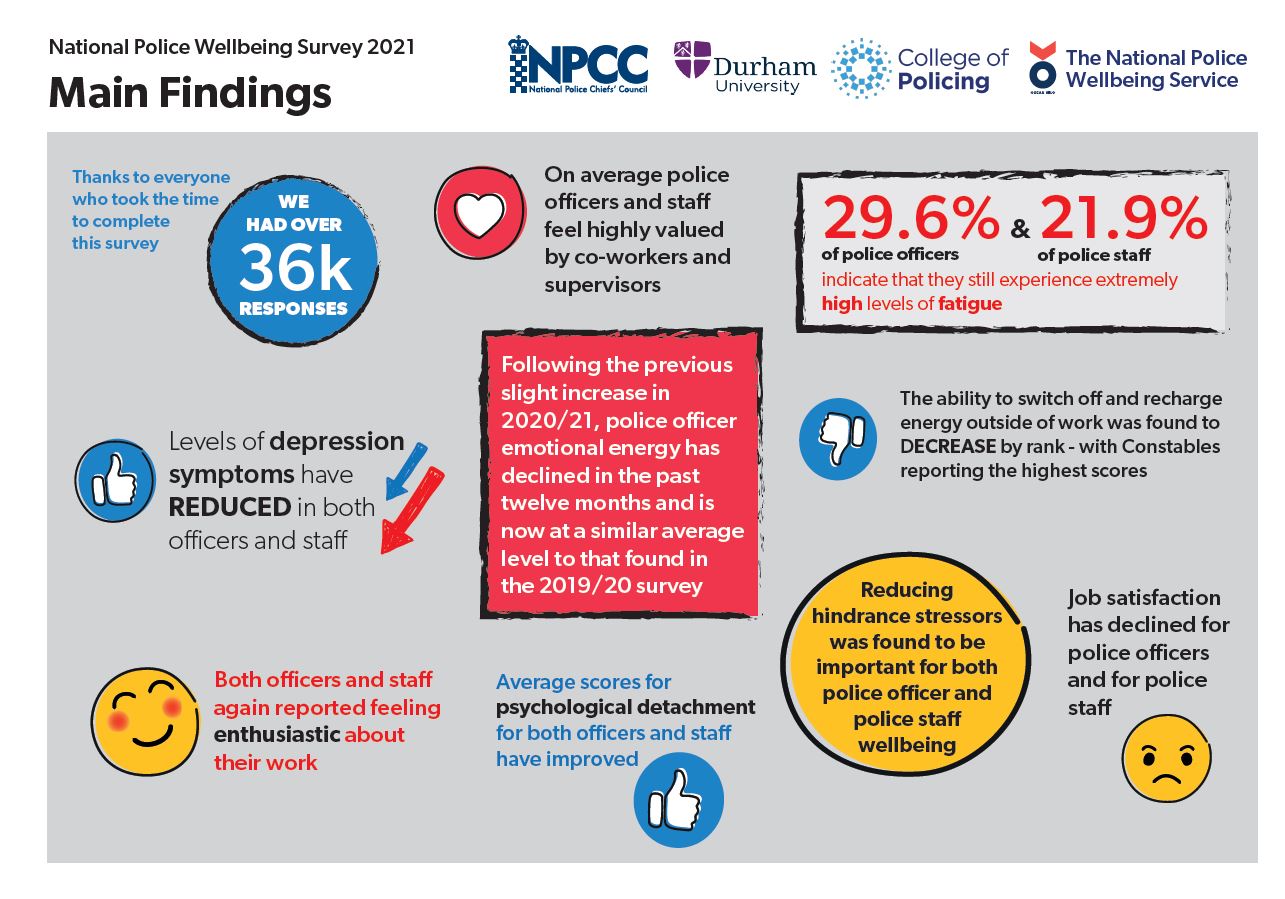